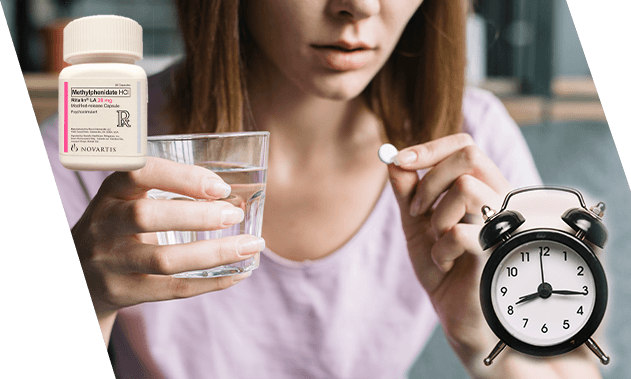 Ritalin is a medication that is used in treating attention deficit hyperactivity disorder. This medication works by regulating the quantity of some neurotransmitters in the brain. It belongs to the stimulant class. It helps in:

Ritalin improves listening skills and helps people suffering from ADHD to efficiently organize their tasks. It should be taken 2 to 3 times a day and it works best 30 to 45 minutes before a meal. Take it at exactly the same time every day so that it synchronizes well with your bodily functions. Do not take the medication in the late nights because it may cause insomnia. Apart from treating ADHD, Ritalin also helps treat narcolepsy (a daytime sleeping disorder). While taking this medication you should strictly adhere to the prescription. A sudden stop may cause withdrawal symptoms. The dose is normally decreased constantly to a halt to prevent adverse withdrawal symptoms. This medication’s half-life lasts for about 1 to 4 hours. Ritalin is water-soluble and does not accumulate in someone’s body cells as some drugs do. Eliminating methylphenidate via the urine may vary from one person to the other.

Proper ADHD treatment can save you from hyperactivity. Click the button below to book your appointment.

Some people tend to eliminate about 100 percent in a day or two, while others eliminate just 75 percent in the same time. Ritalin can be detected when urine is screened between one or three days after use. Ritalin can be tested when saliva samples are taken in a span of one or three days after using the drug. Blood tests do not detect Ritalin at all. Methylphenidate can be tested using hair follicles for about 30 days after consumption.

Does Ritalin Make You Pee a Lot?

When Ritalin is used in high amounts, it may increase bladder pressure, which causes a person to pee a lot. However, more studies are needed to confirm a definite connection of Ritalin on the genitourinary system.

How Long Does Ritalin Last, 10mg?

How Long Does Ritalin Last, 20mg?

Experts usually advise people not to take dosages above 20 mg. The dosing frequency is usually determined by the first weeks of using Ritalin. The effects of Ritalin last for almost 3 or 4 hours (Forlini & Racine, 2009).

What Does Methylphenidate Test Positive for?

Methylphenidate is used in the treatment of attention deficit hyperactivity disorder. Ritalin tests are positive for methamphetamine or amphetamine and LSD.

Use and Abuse of Ritalin

Ritalin is used in treating ADHD (attention deficit hyperactivity disorder). It is used to treat children as well as adults who have gotten this disease. It cannot be used in treating children who are below the age of 6. Ritalin is used in stimulating the body and the mind of adults and can be used to calm down children. This medication helps people with ADHD to be able to pay attention better to the task. 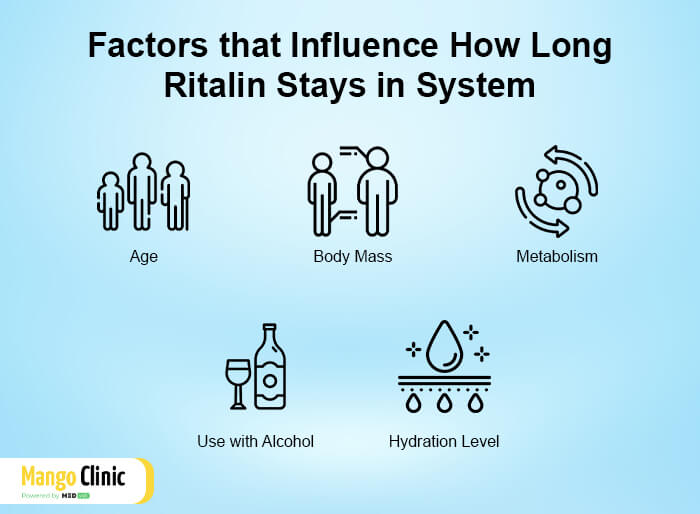 It also decreases hyperactive and impulsive behavior. Adults use it in treating narcolepsy; that is too much sleep. Other people, more so the adults, misuse Ritalin. Since it increases someone’s alertness athletes, students, and professionals abuse it to maximize productivity. There are cases of students who suffer from ADHD selling their drugs to other students who use them to increase their alertness.

According to Porterfield (2009), high blood pressure is one sign of Ritalin overdose. Irregular heartbeats can also be a sign. Some more complications led by excess Ritalin are:

Ritalin can be detected by doing urine screens after one to three days of its use. Saliva can also detect Ritalin use three days after use.

How Long Does Ritalin Stay in Urine?

Ritalin stays in someone’s urine for three days. If tested before three days of use, Ritalin will be detected.

Get yourself evaluated for ADHD and impulsive behavior. Click the button below to book your appointment.

Does Ritalin Build up in Your System?

The half-life of a drug is the time taken to break down the drug’s quantity to about half its concentration in someone’s system. Ritalin lasts for about 5 to 6 hours in your system and the next dose is needed after that. There is an extended release of the drug that lasts for up to 11 to 14 hours in your system. Check with your doctor to determine which one is appropriate for you.

Ritalin on a Drug Test

Ritalin can show or at times not show during blood tests. Ritalin may show if the screening is for amphetamines.

How Long Does It Take for Ritalin to Get Out of Your System?

The medication can be analyzed when saliva samples are obtained one or three days after taking Ritalin. Ritalin is undetectable in blood testing. Hair follicles may be used to test methylphenidate for roughly 30 days following ingestion.

How to Get Ritalin Out of Your Urine?

Ritalin can be detected in the urine for 1 to 2 days from when the last dose was administered. Sometimes it could take up to 4 days. To get Ritalin quickly out of your system you should hydrate constantly and keep yourself active. Water helps to flush out toxins from the body through urine and sweat and increased metabolism through activity fastens this process. 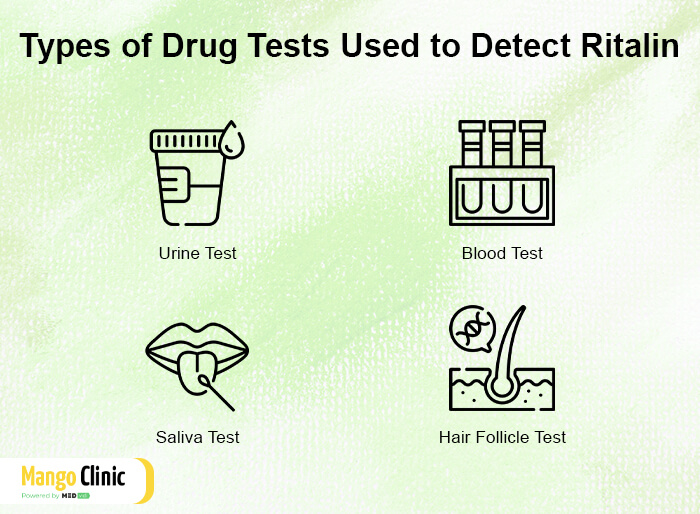 Ritalin aids in improving a person’s ability to pay attention, regulate their behavior issues, and stay concentrated on a certain task. It also aids in the development of their listening skills and the organization of their work. It can be identified when urine is checked between one and three days after taking Ritalin.

The medication can be analyzed when saliva samples are obtained one or three days after taking Ritalin. Hair follicles may be used to test methylphenidate for roughly 30 days following ingestion. Doses more than 20 mg should be avoided. The initial weeks of Ritalin use generally establish the dose frequency. Ritalin’s effects linger for almost 3 to 4 hours.

Contact us at Mango Clinic for ADHD treatment or click the banner below to book your appointment.