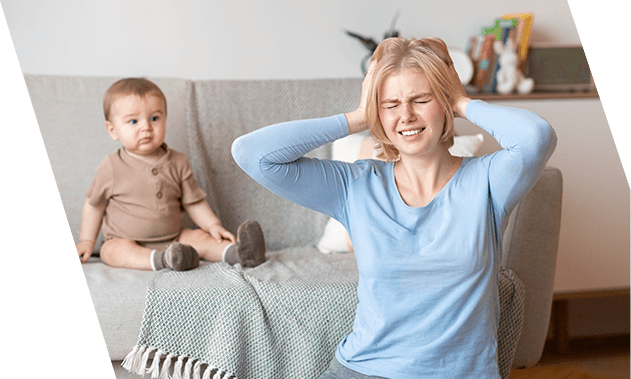 Peripartum depression, also known as postpartum depression, is a common and severe condition that may develop during pregnancy or after childbirth. While having a baby is an exciting and joyous moment for most women, it may still cause anxiety in others.

As per the term “peripartum”, this type of depression often begins long before delivery. And it may last for some time after giving birth too. The good news is that this condition can be treated with the help of mental health practitioners, and treatment is especially effective if a diagnosis is made early.

If you think you experience depression symptoms during pregnancy or soon after childbirth, consult with our professionals to get help.

Start With A Free Assessment

What Is Peripartum Depression?

Mental health experts describe this disorder as a mixture of major feelings that include fatigue, anxiety, extreme sadness, guilt, and indifference. Peripartum depression may also manifest itself in the changes in appetite, sleep, and energy, carrying some risks to the mother and unborn baby. Statistics show that approximately one in every seven women experiences this type of depression.

The definition also encompasses new fathers as they can exhibit signs of this major depressive disorder too. Their symptoms include fatigue and changes in sleeping or eating. Approximately 9% of fathers experience the condition within one year after the birth of their child. Fathers with a history of depression, young fathers, and those with financial challenges are at a higher risk of experiencing postpartum depression.

Pregnancy and the period following childbirth can be vulnerable to women. They often experience intense emotional, biological, social, and financial changes, putting them at a higher risk of developing mental health problems, primarily anxiety and depression.

According to the Diagnostic and Statistical Manual of Mental Disorder (DSM), the symptoms of peripartum depression include:

The severity of the symptoms may change from time to time. Peripartum onset must have occurred during pregnancy or within four to six weeks after delivery for one to be diagnosed with it.

Most women experience baby blues in the days after child delivery. Symptoms include:

The main difference is that baby blues symptoms usually disappear three to fourteen days after their onset. On the other hand, the effects of peripartum depression are prolonged as well as emotionally and physically draining and severe. That is why getting the proper diagnosis and treatment is crucial for the mother and baby. 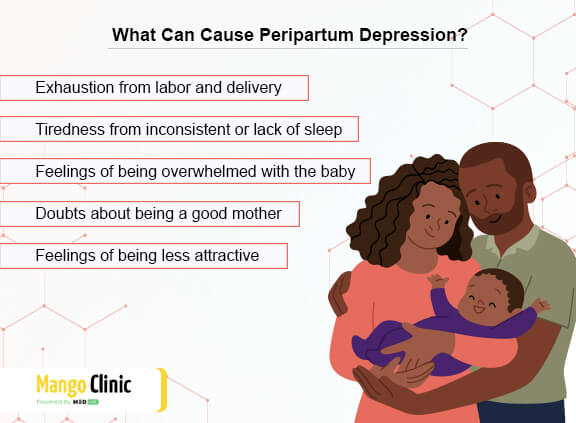 The most common cause of peripartum depression is hormonal changes. The levels of estrogen and progesterone are at the highest they can ever be during pregnancy. In the first 24 hours after childbirth, the hormones start to drop off to routine or where they were before pregnancy. Researchers think that these sudden hormonal changes after baby birth can cause depression.

Other peripartum depression causes include:

While these feelings are common in new mothers, peripartum depression is a depressive disorder. It requires immediate peripartum onset treatment. The condition isn’t a regular or expected part of being a new mother.

Self-diagnostics is not the case for postpartum depression—a person needs professional consultation to get suitable and effective treatment.

Connect With A Therapist

While peripartum depression has existed for years, there isn’t a specific test to diagnose it. Healthcare providers often evaluate or assess the patient at their postpartum visit and discuss their health history and feelings since delivery. The standard assessment may include a pelvic exam, physical exam, and lab test. Many healthcare providers schedule a visit two to three weeks after delivery for screening across many risk factors that may point to depression.

No blood tests or body scans show a patient’s mood disorder. However, the doctor will ask specific questions about the state of mind, guided by these PPD screening tests:

For any symptoms of depression that a patient displays, the doctor will continue with the assessment to evaluate the severity.

Peripartum depression is a kind of depression treatable with counseling and medication. Also, getting enough rest, creating time for self, accepting help from family and friends, and connecting with other new mums can help improve the symptoms. Still, the most effective and common interventions in the line of treatment for postpartum depression are disclosed below.

Also known as talk therapy or mental health counseling, psychotherapy helps the patient talk to a psychologist, psychiatrist, or other mental health specialists regarding their concerns or fears. Through therapy, they can find better ways to solve the problems they face, cope with their feelings, and respond to situations more healthily.

The doctor may recommend antidepressants in the management of peripartum depression. Most types of these medications are safe for use during breastfeeding, posing little or no risk to the baby. Still, consulting with the doctor to weigh the benefits against the potential dangers of certain antidepressants is crucial. 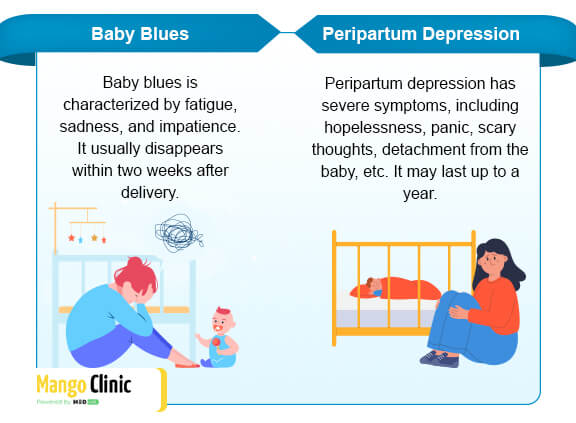 When it’s a case of postpartum psychosis, there’s a need for immediate treatment at the hospital. Interventions to help manage the episodes include:

Feeling overwhelmed during and after pregnancy is a common thing, but sinking into depression is not something normal. If you experience unpleasant symptoms, seek professional help and talk to a psychiatrist. In a safe environment, you can trust the doctor to tell how you feel, learn how to find time for self-care, eat healthily, and master other beneficial methods of improving your mental state. Getting medical attention is a factor that can help eliminate the symptoms and overcome the effects of depression; contact us today to know more.

Real help for Depression.
Beat your symptoms with our expert advice.

previousNorpramin for Depression Treatment: Dosage and Side Effects

nextMAOI Drugs for Depression: How Do They Work?