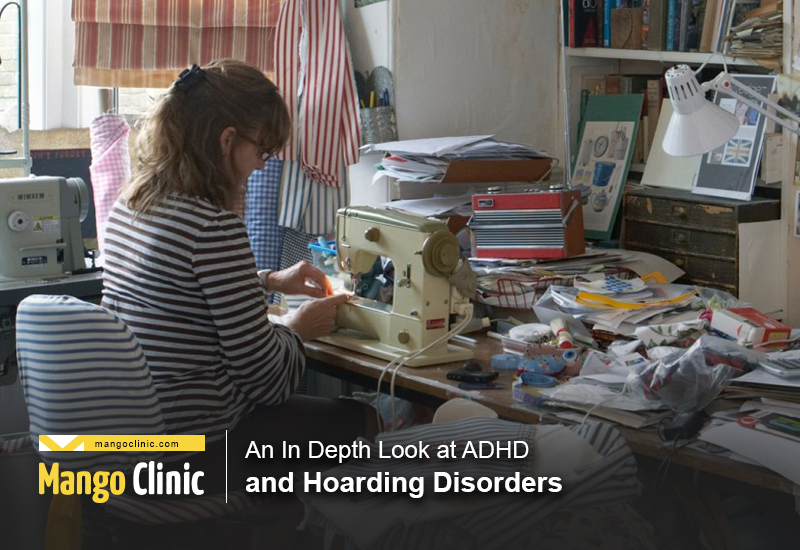 According to data from the National Health Interview Survey, more than 10 % of the US population have Attention Deficit Hyperactivity Disorder (ADHD) while Hoarding Disorder affects approximately 2.5 percent of adults. And while these conditions are entirely different from each other, they can coexist together, as well as with other disorders like OCD.

Notably, ADHD has been classified, and widely known, as a compulsive disorder on its own for many years. Hoarding Disorder, on the other hand, was for the longest time classified as a type of OCD. Consequently, there are more published research papers and treatment designs on the former than the latter, which was only categorized as a separate mental health disorder in the DSM and OCD-11 a couple years ago.

Suffering from mental health disorders? Click the button below to book your appointment.

Attention Deficit Hyperactivity Disorder (ADHD) is the more modern medical term for the disorder that was formerly known as Attention Deficit Disorder (ADD). It is typically a biologically based neurological condition that commonly affects children and whose effects include; trouble paying attention, disorganization, forgetfulness and impulsive actions.

Although periodic loss of focus is an increasingly common thing among most people, even those without underlying mental health problems, it is much worse for people with ADHD, especially children. The latter may find themselves daydreaming and subconsciously squirming and fidgeting while in class and not even be aware of their present surroundings. They may also talk too much, often without thinking, and also take stupid and unnecessary risks.

Notably, there are 3 types of ADHD, which have varying symptoms and effects, depending on the individual. These are:

Like with most mental disorders, it is not yet known what exactly causes ADHD and even information on the risk factors remains inconclusive and scant. Nonetheless, ongoing research suggests that genetics are a big contributor to the development of the disorder. Other possible causes under review include traumatic brain injury, premature delivery, and exposure to environmental lead when in the womb, or in early childhood.

Want to get FDA Approved ADHD Drugs Only? Click the button below to book your appointment.

Contrary to what you may have heard, however, ADHD is not caused by social and environmental factors like poor parenting, poverty or too much exposure to television. Heck, even excessive sugar intake is not a risk factor.

What is Hoarding Disorder?

Hoarding Disorder (HD) is a mental disorder often characterized by the excessive and undue accumulation of items and/or animals, and failure to discard them when and where appropriate. This excessive hoarding takes up considerable space in the person’s life, and physical environment, which makes it harder for them to accomplish their daily tasks. Where the hoarder lived with family or friends, their excessive hoarding off stuff may also negatively affect the other people.

And just like ADHD, there are 3 major types of HD as follows:

Naturally, the main risk factor in regards to HD is genetice. It is estimated that having a first-degree family relation with hoarding disorder increases one’s chance of developing the disorder by between 50 and 80 percent. People living with ADHD are also more likely to have HD later on in life as some effects of the former may inadvertently cause one to hoard things without even realizing.

Looking for natural ADHD treatment? Click the button below to book your appointment.

If you have ADHD or HD, you may have felt downtrodden after finding out that there’s no magic OTC treatment that gets rid of the disorders entirely. That, however, doesn’t mean there’s nothing you can do about it.

At Mango Clinic, we have a team of mental health experts who will help you diagnose ADHD and any other mental health issues you may have and subsequently prescribe personalized therapy for the same. They also advice on the best coping mechanisms to reduce the negative impacts of the condition(s) on your life and those of your loved ones as well as any necessary dietary changes you need to make.

Don’t hesitate to book an appointment today and talk to one of our doctors if you have any concerns or questions.

previousImportance of the First Four Weeks of Dieting to Weight Loss